What is the Glycemic Index (GI) all about?

The glycemic index (GI) is a relatively new nutritional tool used to fine tune carbohydrate intake. It is a measure of the real physiological response to food, giving an indication of the rate of absorption of carbohydrates in foods.

Using this glycemic index information, one can easily differentiate between fast release, and slow release carbohydrates, which enables one to optimise ‘fuel’ levels in the body.

This is of particular relevance to sportsmen and women, slimmers and those with diabetes. Eating mainly slow release (Low GI) carbohydrates before a sporting event, ensures good ‘fuel’ levels in the early stages of the event, as well as preventing the dreaded sports induced hypo’s afterwards. Re-fuelling with fast release (high GI) carbohydrate drinks, maximizes glycogen stores immediately afterwards, preventing exhaustion, hypo’s and resulting in better recovery after the event.

In diabetes optimum blood glucose control can easily be achieved if mostly slow release carbohydrates are eaten in the correct amounts.

And in slimmers, by preventing surges of blood glucose levels, by eating mostly low GI (slow release) carbohydrates, the stimulation of fat STORAGE is prevented. Insulin, the hormone that helps to clear glucose from the blood is also the hormone that stimulates the body to store fat. Thus the more fast release carbohydrates are eaten, the more fat is stored.

Implementing the GI is easy when using the correct ingredients 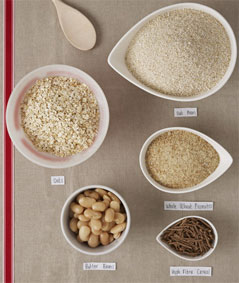